Businesswomen on the Rise: Positive Trends in the UK

The latest findings on the reasons that prevent women getting into FTSE350 boardrooms are depressingly familiar and shameful. Nevertheless, the shift towards self-employment, freelancing and independent working is having an impact on gender equality in the UK. The direction of travel is positive as the gap between the number of businessmen and businesswomen is closing. This post looks at the current situation regarding female self-employed and female-led startups in the UK. 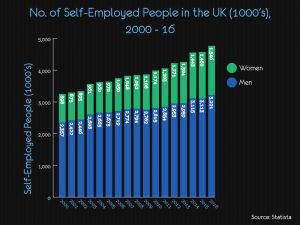 Regionally, London and the South East are the leading hubs of female start-ups, with businesswomen generating an extra 18,000 jobs in the Capital in 2015. That’s an increased economic contribution of £790m from female-led start-ups in London alone. 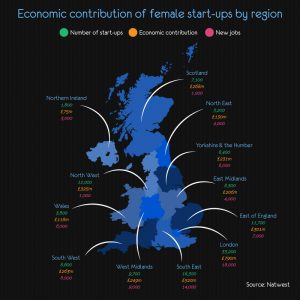 Anecdotally, I meet more and more women seeking self-employment or wanting to run their own businesses in the field of careers advice and coaching. For example, in the last five years, I’ve run workshops for the Career Development Institute (and its predecessor, the Institute of Career Guidance) for over a 100 people seeking to go solo. The vast majority are women.

Why do they want to go solo? Because the world of work is changing. For some, redundancy from the public sector is the driver. Some are seeking more control, autonomy, and flexibility over how they live their lives. Others simply want more meaningful existences, alternative and multiple streams of income. Many do not know how to make the entrepreneurial leap, hence the workshop.

To be clear, this is not about female traits or characteristics. It’s about labour market forces, empowerment, and increasing self-confidence. “Businesswomen”? No, self-employed, business owners, and entrepreneurs who happen to be women.

Thanks go to our friend Georgia Davies of MoneyPod for the statistics and infographics in this post.