How to Influence Your Micro-Managing Boss with Skill

Your boss is a human being and, as we know, to err is human, which means that sometimes even those petty, annoying micro-managers don’t do all those things on purpose.

And, even if your boss is simply a bit controlling, there are some methods to help you communicate your dissatisfaction, influence your manager, and improve your position.

Keeping the lines of communication open and providing relevant feedback isn’t important only when it comes to employees. Managers should also be aware of how their tone and demeanor affect their team, projects they work on, and, subsequently, the company, so it’s absolutely normal and even desirable to inform them about that.

Of course, the way you do that and the methods you use are of crucial importance for the success of the entire mission.

65% of employees say they’d rather take a new boss over a pay raise! Don’t become a part of this unpleasant statistic and take action.

As you can guess, to influence your boss can be tricky, which means that you can’t simply start with it out of the blue and spill the beans without sugar-coating things. The point isn’t, however, to diminish all the issues, but to reframe what you want to say and make it as helpful and acceptable as possible. Otherwise, you might cross the line and bruise your boss’s ego.

The best approach is to think of everything through, make some notes, and write down the most important issues. After you’re sure that what you want to say is well-thought-out, it’s essential to ask your boss for permission to voice your opinion and have your say.

The point is to be clear about what the problem is and formulate it in a manner that expresses how you feel about their behavior – don’t make it sound like an accusation.

2. Insist on the Benefits to the Organization

It’s a good idea to go beyond your own feelings and present the issue through the prism of how it affects the company.

The thing is that your boss might not be too interested in considering the idea that you don’t particularly like a certain process and think that it should be done differently. He or she will be more willing to hear you out if you mention how this entire issue can have a detrimental impact on the business.

In other words, your feedback should definitely contain something along the lines of “this particular behavior/system/process not only makes me less productive but also slows down the company’s agility and performance.”

Being sincere and assertive is a great skill, but in some situations, you need to be a bit more tactful to successfully influence.

Don’t use criticism if you don’t want to start off on the wrong foot. Instead, offer some genuine compliments and list a couple of things that your boss helped you with or inspired you to do.

It has to be stressed that this praise needs to be authentic as otherwise, it will come off as manipulative sweet talk.

When you pave the way with praise, you’ll establish a sense of respect and loyalty, and it will be much easier to communicate your concerns and problems.

Psychologically speaking, your boss will be more inclined to listen to you and hear what you have to say if you don’t use a seemingly self-centered approach.

Similarly, don’t use “they” when referring to management, as that way you’re putting and obstacle between “you” and “them” and make it sound as if you’re on the opposing sides.

That’s why using the pronoun “we” can do wonders for bridging the gap and establishing that you don’t see your managers as enemies.

As a matter of fact, it will help you express your sense of camaraderie and convince your boss that all your remarks are said with the best interests of your company in mind.

5. Be Mindful of When You Say It 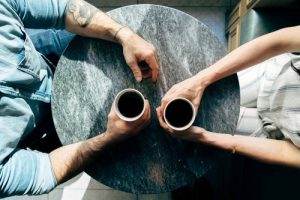 One of the principles of good communication is to deliver your feedback immediately after an incident (or a positive event, for that matter).

For example, if your boss keeps on interrupting you during a meeting, wait for it to finish and ask them for a quick chat afterward, while everything is still fresh in your and their mind. Then, in a private and a quiet setting, tell them how the fact that they cut you off mid-sentence made you feel and how it influenced your participation and collaboration.

However, sometimes it will take more time for you to muster up the courage to voice your opinion and say what bothers you.

If your boss is still new, it’s best to establish a connection and build a positive relationship with them before you decide to speak your mind and try to influence them.

You should know better than going to your boss’s boss and telling on them.

The first thing to do is have a frank and open discussion with your boss. In other words, it’s not a good idea to completely circumvent your boss without having at least a couple of attempts to influence things.

Although there are a few bad bosses out there who enjoy making their subordinates miserable, it is an exception. So, assume the best and give your grumpy boss the benefit of the doubt.

It may turn out that they’re completely unaware of the effects of their behavior.

But, if all your attempts are in vain and it becomes necessary for you to take the matter further, it’s still essential to let your boss know about your plans or start polishing your CV.

But it’s easier said than done, so helping your boss to become a better leader benefits everyone and the company.

Thanks for this post go to our friend Michael Deane of the small business blog, Qeedle.