How to Turn a Limitation into a Strength

An enduring weakness differs from a temporary limitation. For example, you might always struggle with standing up and presenting to an audience and have some disasters along the way, especially through inexperience. But you can learn how to get by with practice. And sometimes avoiding the things that don’t come naturally can result in missed opportunities in your job and career. You won’t know if the limitation you perceive is temporary or something more enduring until you test things out. Here are some examples of breakthroughs in sport and music. 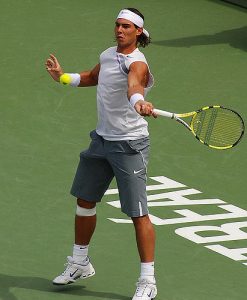 Many tennis players have one arm bigger than the other including Serena Williams and Rafael Nadal. He is famous for his left-hand stroke play even though he writes with his right hand.

My left arm is much more developed than my right arm. This is because I play lefty and that’s sort of my gym, the tennis court. Rafael Nadal

Australian serial Grand Slam winner in the 1960s and 1970s, Margaret Court, is a natural left-hander who was persuaded to change to a right-hand grip. She practiced with her preferred hand tied behind her back to strengthen her right-hand strokes.

Kurt Cobain, the lead singer of Nirvana, was a left-handed guitarist. He was so poor in his early

days that he couldn’t afford a left-hand guitar. So he would practice with a right-hand guitar upside down. He found a way to overcome his challenge. Like Nadal and Williams, his passion fueled his learning and he put in the hard work of endless practice.

The law of the vital few

If a current limitation you perceive is holding you back, try deconstructing your biggest one to speed up your self-awareness. Invoke the 80/20 rule (the Pareto Principle named after a 20th-century Italian economist) or the ‘law of the vital few’. Which 20% of your skills, knowledge, attitudes or behaviours cause 80% of your challenges or blockages in becoming more employable? Deconstruct the one thing in that 20% that holds you back the most. Then use that understanding to find what works for you.

The worlds of sport and music show us that perceived weaknesses may only be temporary limitations. We can change them through determination, persistence, and hard work. Focusing on your strengths is the tune of the day in preparing for job interviews and career assessment. Yet, sometimes reconfiguring the notes can provide breakthrough thinking into what works for you.

What do you perceive as your current limitations? What if you gave them a chance to flourish and become strengths? Then what job and career dreams would you pursue?