Virtual Language Learning: How To Boost Your Job Chances

It was my first time learning Spanish since high school and this time I was determined to do it right. I wasn’t going to class, or bringing a tutor to my house – I was doing it all virtually. I met with my teacher over Skype which would be the beginning of my long journey in language learning via Skype and my even longer journey in running a Skype language training service.

Why Language Learning via Skype Works 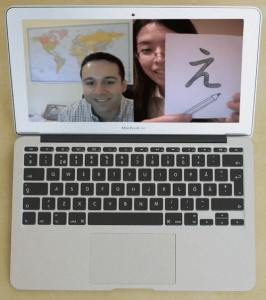 Traumatised from all of those boring hours in high school trying to learn Spanish, I wondered if I was bad at languages as a whole or if it was just the language learning method that I was using. I was amazed at my progress after my first few sessions on Skype. Instead of sharing a classroom with 20 other people, all at different levels, now it was just me and my teacher. Rather than learning Spanish only during 9th period, I could learn whenever I wanted. Instead of having to go to school during the week, I could learn from anywhere in the world – whether that be my apartment or my hotel room when I was traveling for work. I had access to my personal tutor from Mexico whenever I wanted. She not only helped me learn Spanish but made it an enjoyable experience too.

Why Language Learning 1-on-1 Works Best

Fast forward a few years, and I’m the CEO of a company that teaches Spanish, in addition to 11 other languages, all via Skype. Why did I leave my cushy job as a tax accountant? Because I am obsessed with learning and convinced that this is the most effective and efficient way to learn something.

There are many different places where one can learn something – a book, an audio tape, a video, a class, or a tutor to name a few. Learning with a live person 1-on-1 is the quickest and most effective way for learning a foreign language. All of your questions are answered on the spot. The best way to learn a language is by speaking it as much as possible and immersing yourself in it.

A challenge that comes with learning with a live tutor is obviously the price – that’s why learning via Skype is a great choice! Instead of paying someone a competitive price according to the country you live, you are paying someone a competitive price to the world you live in. What may be little to you can be a ton to someone else – everyone wins.

Be Sure to Overcome These Challenges First

Language learning via Skype requires strong discipline. Don’t feel like attending a session? Rather than calling up your tutor apologizing for the cancellation and feeling awkward, you could do it all via the click of a button. The same holds true for scheduling lessons – sometimes, too much freedom can be a challenge. It’s just like working from home. If nobody is going to be watching over you, you need to make sure you have the discipline to stick to your regimen. Another challenge could be the internet connection. Not everyone has access to high-speed internet. Be sure to put yourself in an area where the connection is the strongest.

Stand Out in your Career

Learning a new language not only empowers you mentally, it also gives you an edge in your career. In the U.S. there are more than an estimated 50 million Spanish speakers – let alone the remaining 400m+ Spanish speakers in the rest of the world. And that’s not even the most commonly spoken language (it’s Chinese). Learning a new language will help your resume stand out. It will help you earn close to $10,000 more than someone who speaks just one language. The world is becoming more and more connected. The more prepared you are for the transition, the better off you’ll be.

Now it’s time to revisit that foreign language that you always wanted to improve but never got around to doing. Language learning takes not only discipline but also consistency. If you haven’t given Skype learning a try yet, or you’ve had a bad experience, give it a go! Get a 30-minute trial lesson at Skill Silo and use coupon code LEARN2LEAP10 for 10% off your first purchase. Then you’ll be one step closer to speaking like a true native.

Thanks for this guest post to our friend Josh Aharonoff, Co-founder and CEO of Skill Silo.